Sympathetic Skin Response (SSR) measures change of the electrical potential of the skin. The recorded skin potential comes from the activated eccrine sweat gland. The amplitude and configuration are adjusted by sweat gland epithelium and the overlying epidermis.


The first report of the galvanic skin response appeared in 1890. Since then, various terminology has been introduced on the basis of different stimulating and recording methods (e.g., electrodermal activity, sympathetic skin response [SSR], peripheral autonomic surface potential, psychogalvanic reflex, and sympathogalvanic response [SGR]). A standard method of obtaining SSR is to place a recording electrode on the palmar and plantar surfaces, because these recording sites yield higher amplitudes. A stimulator is placed on either the median or the tibial nerve of the opposite limb, and the stimulus is given randomly at a rate of less than one per minute, and with a stimulus intensity that is sufficient to cause mild pain. A 2 to 10 responses should be recorded, and SSR responses are obtainable 60% to 100% of the time in normal subjects. Waveforms are usually triphasic, with an initial small negativity followed by a large positive wave, and a subsequent prolonged negative wave. Waveforms can also be monophasic or diphasic with an initial negative or positive peak. Maximal peak-to-peak amplitudes and mean latencies are measured. Amplitude and latency variability can be minimized by reducing stimulus frequency, increasing stimulus intensity, and/or changing stimulus site or mode. Low skin temperature, low level of attention, medication (especially anticholinergics), age, and habituation will also attenuate the response. Normal amplitude is more than 1 mV for the hand, and more than 0.2 mV for the foot. Mean palmar latency is 1.4 +- 0.1 second and plantar latency is 1.9 +- 0.1 second. The SSR measures change of epidermal resistance due to sweat gland activity. The somatic afferent limb depends on the stimulus type (electrical shock, loud noise, visual threat, deep breathing); with the electrical stimulation, the afferent limb occurs via large myelinated fibers. The efferent limb is a sympathetic pathway, originating in the posterior hypothalamus, descending through the spinal cord to the intermediolateral cell column, and paravertebral ganglia and then to the sweat gland via small unmyelinated fibers. 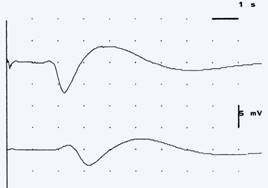