Quantitative Sudomotor Axon Reflex Test (QSART) is a test to evaluate the integrity of the postganglionic sudomotor system along the axon reflex to define the distribution of sweat loss. This is accomplished by the release of bio-impedance electrical stimulation the skin which activates receptors on the eccrine sweat gland. The sweat response is recorded from four sites (forearm and 3 lower extremity sites) and assessed for deficits.

The QSART is a test that measures the autonomic nerves that control sweating. The test is useful in assessing autonomic nervous system disorders, peripheral neuropathies and some types of pain disorders. The test requires a mild electrical stimulation on the skin, which allows to stimulate sweat glands. The QSART measures the volume of sweat produced by this stimulation.

QSART is used to diagnose:


The quantitative sudomotor axon reflex test (QSART) has been a routine postganglionic sudomotor function clinical laboratory test since 1983. QSART is a test designed to evaluate the integrity of the postganglionic sympathetic axons. At regional test sites, multicompartmental sweat cells are attached to the limbs. Axon terminals are stimulated by the bio-impedance current, and the sweat response is recorded from a separate compartment. Typically, four regions are studied (one on the forearm and three on the leg).

In order to assess axonal excitability, transcutaneous electrical stimulation was used to induce a combined sudomotor and nociceptor activation. Thereby, both intensity of axon reflex sweating and area of axon reflex erythema can be quantified (Namer et al., 2004). The measurement of axon reflex erythema responses is mainly used under steady state conditions and therefore requires several minutes of electrical stimulation. Thus, systematic analyses of stimulus-response functions for current intensity or frequency would be problematic using this extended protocol. We therefore assessed transient sweat responses and pain to electrical stimulation of 30 s duration. Differential axonal excitability and activation profiles were explored and functionally described for sudomotor neurons and nociceptors by means of current intensity- and frequency-dependent response curves in different body sites.

This is a sensitive, reproducible, and quantitative method to test sudomotor function. The basis of the test is that the axon terminal of the sweat gland under the plate electrode is activated by bio-electrical stimulation; the impulse travel centripetally to a branch point and then distally to the axon terminal and a sweating response results. Use of the term "axon reflex" should be discouraged, because only the postganglionic sympathetic sudomotor axon is considered to be involved in this setup. With a latency of 1 to 2 min after the induction of the stimulus, sweat output increases rapidly while stimulation continues; then the stimulator is turned off, and sweat output returns to its prestimulus baseline within 3 min. The area under the curve represents the total amount of sweat output expressed in microliter per square centimeter, and the normal value varies depending on the site of testing, gender, and age of the subject. Distal limbs, male, and younger subjects tend to sweat more. Reduced or absent response indicates postganglionic disorder. Normal response does not rule out preganglionic involvement. Excessive and persistent sweating is also considered abnormal. Comparison is made between the two limbs, and an asymmetry of more than 25% is considered to be abnormal. 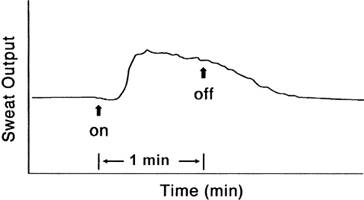